The Power of Connections

Good Evening, people of the light and shadows, contrast, layers, mass and fine lines. I’ve been wanting so much to share an experience of reading a book with you, and I’ve been thinking, as I fall asleep working on something, I must tell my friends about this book, because the only time I put it down is to cry.

This was a funny day, humorous in its assault of cold winds and dim atmosphere, as the blossoms stood incredulous, defiant at the insult, I mean joke. Winter? Come on! We were just beginning to feel loved by other than the birds! Any how, we must go on as if it’s a passing slight, we must go out and play, roll into the streets for coffee, get out for heaven’s sake, it’s Sunday and six months of Winter is simply too long. (For an East coaster) And so, I was out with my daughter and my friend at café MeMe in Brooklyn, admiring the handsome couples and pink handled knives, when we decided to do a million things in an hour.

We started on our journey through the neighborhoods, the tendrils of our plans reaching every aspect of living as we passed this place we must stop at, then that place, me feeling like we were in the Hundred Acre Wood, until we got to my friend’s house, and she discovered her dog had gotten out. Suddenly, the ease of feigning Spring turned into a harrowing and draining emergency to find her little, tiny Yorkie who was lost and no doubt shivering in the cold.

Of course I made signs immediately, signs with a crying face and a broken heart, until my neighbor said I have to make signs offering a reward, and so I made signs that looked like business, with dollar signs floating promisingly over the phone number. We looked and called, you know how it is to lose an old dog who could get swept away by the wind, or run over like a plastic bottle, there is no end to the fretting and despair as you slip through fences and crawl under cars.

Hours later, my friend got a call. “I have your dog.” Wow. And here is where the story ties into the book I’ve been wanting to share with you. With very little information, we went to the place where the dog was being held, and we waited on the cobblestone street almost beneath the Brooklyn Bridge. By this time it was raining cold, mean water on the weary borough, Sunday was slipping down the gaping gutter, and gloomy Monday was waiting in the wings. Just then, a startling head of thick grey and blonde hair blew around a confident face I could only describe as a pretty plate. Eyes determined and features set in a trustworthy balance of earned confidence, her scarf flew, and her grey cape flapped open, exposing “Le Chien!” The woman stepped across the cobblestone like she was delivering a heart to a person in need of a heart transplant; the importance, the gravity, the reception, must be understated. 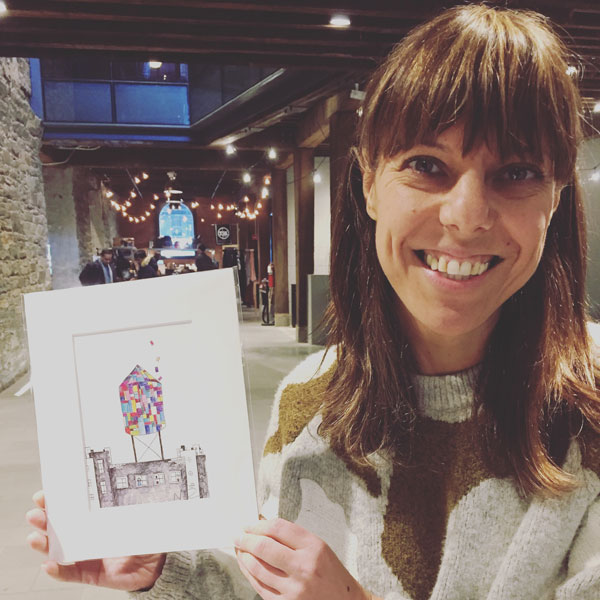 Then, as I stood mesmerized by this woman I pegged as an ambulance driver for the Resistance in World War 2, I heard a lovely sound. “Sophie!” rang a bell from across the street, “Sophie, its Nadia!” I turned toward the voice. I know her, I thought. “I met you at the Carlyle!” Yes, I completely remembered, Nadia, John Deli’s (my piano player on the show) girlfriend. And now I would get the full story of how the dog got saved.

Nadia was in a Juno on her way to sell her amazingly good artwork at this place under the Brooklyn Bridge on Water Street. Of course, she was in a rush because the weather was so horrid, how could one extricate one’s self from cozy arms early enough that morning? So there she sat in the back of a rushing Juno car, when the little dog ran out onto the street, the driver swerved, and Nadia made him stop so she could scoop up the dog.

Had the dog been wearing any identifying gear, the story would be short. Thus, Nadia brought the dog to the store where she was selling her art, but she couldn’t bring the rag a muffin in, so she enlisted her friend to take care of the dog until further instructions would be given. The friend with a face like a pretty plate washed the dog, groomed him, put him in a much appreciated bed with her other dog, and had a nice afternoon being perfectly lovely.

Nadia checked her Face Book and saw an alert with the dog’s picture, amazing, because it was a neighbor who wasn’t even in Brooklyn, who was away with her boyfriend, that had heard from another neighbor, also driving somewhere at the time, that the dog was lost.

Are you not impressed with how fast these ladies, who had plenty to do at that moment, worked? How neighborly and generous they were, while I was putting up signs, they were net working like war correspondents.

It’s the connections that made me feel so excited, as though all of our souls, including the dog’s, were talking. The book is called, “Einstein and The Rabbi”, by Naomi Levy. There really is no way that my description can do the work justice. You must simply read it. I did cry every chapter, and I haven’t forgotten one moment of the book. It is a gift, a real blessing, I hope to someday tell Rabbi Levy my feelings about some of her stories, but, more importantly, I use the work as a guide for how much I hope my new work can connect my soul with your soul, in a way that is unexpected and profound and most importantly, healing and inspiring.

I read a lot, and I learn from every author, and often I learn what I don’t want to do. Rabbi Naomi Levy showed me what I do want to do, in my own way, with my own stories, one at a time. I feel my songs are straight from my soul, I feel some of them are channeled from the place that is eternal, omniscient, beyond and yet about me. Now as I write, as I dare to venture into more complicated and demanding territory, I lean on people like Naomi Levi, and I feel I can lean on her, even though all I have is her book. It’s enough.

This reminds me of something that happened the other afternoon when I’d picked up Dashiell and Esther from school. They were upstairs playing basketball in Esther’s room, and I wanted to play with them, but who else was going to feed them? So I put my favorite CD in my CD player, which I had just dug out of my closet. I put the volume on BLAST and was transported, the cabinets shaking. Dashiell’s head appeared over the banister, his jaw slack in wonderment. “This is MY rock n’ roll!” I yelled. It was Bach solo suites for cello played by Yo Yo Ma. “I love it!” He yelled back, and ran to continue his game.

The simple expressions of us, the sweet declarations of our souls, the non fussiness, the acceptance of what we really like and want to do with our short lease on life in these miraculous bodies, makes life soul full. Pick your path, clear your path, and don’t be upset when you wander off it, that’s your soul’s compass.

I have to thank Naomi Levy for her book, “Einstein and The Rabbi”. Each of our souls has a voice. My soul has more than one. I’m sure yours does, too. And it sounds different depending on which story I’m telling, and who’s listening.

See you on the road less traveled, very soon.
Sophie B. Hawkins